Larry Luchsinger from New York Blood Center (NYBC) and colleagues from Regeneron Genetics Center, Imanis Life Sciences, and Regeneron Pharmaceuticals, Inc. say their findings suggest that background or “herd immunity” continues to be low and that eight months into the US pandemic, it is likely that the proportion of susceptible individuals remains very high, possibly greater than 80%.

The team says the study also suggests that the presence of antibody-based immunity is not necessarily associated with the development of neutralizing antibodies against SARS-CoV-2.

The researchers say the strategy they used to estimate seroprevalence in this study could be leveraged for future rapid assessment of seroprevalence/seroconversion in this cohort to help guide public health decision making.

A pre-print version of the paper is available on the server medRxiv*, while the article undergoes peer review. 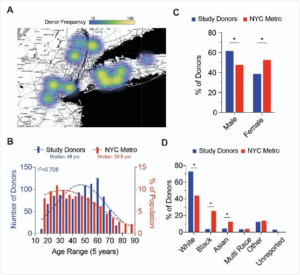 Serological tests of could be valuable for guiding public health policies

Since the first cases of SARS-CoV-2 were identified in Wuhan, China late December 2019, transmission models have suggested that recovery following infection may provide antibody-mediated immunity against future infection.

Serological tests that can identify individuals who have acquired antibodies against the virus (seroconversion) and the frequency of this seroconversion (seroprevalence) in a population could be valuable for guiding the development of public health policies.

As the infection number continues to rise and vaccine programs are introduced, serologic testing will be crucial for monitoring the development of herd immunity – the point where enough people have become immune, and person-to-person transmission is no longer likely.

However, the tests used for population-wide serological assessment must be reliable, credible, reproducible and high-throughput, say Luchsinger and team.

Furthermore, it is vital to understand the degree of correlation of any given assay’s “reactivity” with the presence of neutralizing antibodies, say the researchers, since only a subset of virus-specific antibodies exhibit neutralizing activity.

“Thus, studies that evaluate serological test designs are necessary to associate a serological result with a probability of immunity,” writes the team. “These data, then, can be used to assist public health officials in modeling projections and in informing policy-making  decisions, including the safe ‘reopening’ of cities, states, and regions.”

A range of SARS-CoV-2 antibody assays are currently available, but differences in test characteristics, particularly sensitivity, could lead to variability and potential bias when estimating immunity levels among different locales or subpopulations.

However, two platforms that have been widely cited are in-house enzyme-linked immunosorbent assays (ELISA) and high-throughput serological assays (HTSA), say Luchsinger and team.

What did the current study involve?

New York City (NYC) was one of the first epicenters of the COVID-19 pandemic and had the highest case count per capita in the United States.

“Seroconversion, therefore, is likely to be substantial in a random sampling of NYC residents,” say the researchers.

These were then tested and associated with assays for neutralizing antibodies.

What did the study find?

The researchers also found that ELISA assays, which are the current gold-standard of serological quantification, corresponded with donor seropositivity as detected by these HTSAs, thereby validating the use of ELISAs in this context.

The team says the data suggest that the seroconversion rate was around 1 in 8 among the blood donors since the pandemic began in NYC and that this estimate is in agreement with other reports from state and local departments of health.

What are the implications of the findings?

“Our findings demonstrate a comparable seroprevalence estimate can be discerned using a widely accessible blood donor population and it [is] an important metric during this catastrophic outbreak,” write the researchers.

This strategy can therefore be leveraged in its design for future studies to implement rapid seroconversion/seroprevalence monitoring, they say.

Furthermore, “these conclusions suggest that in the absence of a vaccine, “background” or “herd” immunity continues to be low at four months post commencement, and, now eight months into the US pandemic, it is probable that the susceptible population remains very high, and possibly at ~80% or greater,” the team warns.

medRxiv publishes preliminary scientific reports that are not peer-reviewed and, therefore, should not be regarded as conclusive, guide clinical practice/health-related behavior, or treated as established information.